Welcome back, dear reader, to my newest series! SHE WROTE is a series about women writers that have influenced me with their lives and works. Each week, I’ll profile a female author and share my personal experience with them, my favorite of their works, some links for further reading about them, and a checklist so you can join in the fun by reading their works too! I’m really excited about this series, so I hope you’ll enjoy!

Despite hating spoilers with every fiber of my being, I can get carried away when I start talking about a book. My sister now stops me when I start to tell her about a book I’m reading unless she’s completely certain she will never want to read it. She calls me the Spoiler Queen because I’ve ruined so many books for her by mistake, carried away by explaining a story or characters to her in the passion of a good book.

“This isn’t a spoiler!” I protest.

She puts up her hand or walks away. “You always say that, and it’s always a spoiler.”

By the magical workings of divine providence, I’ve been served a bit of my own medicine. I started reading The Murder of Roger Ackroyd this week, and I suddenly remembered that I had read a spoiler telling me who the killer was. I was devastated. I remembered at once that I read a review several years ago about a completely different book where the reviewer casually told the reader who the killer was “because it’s an old book and you probably already know this.” I didn’t, dear reader.

I was about a quarter of the way in to the book and enjoying it immensely when I had this sad ah-ha moment. I decided to keep reading anyway, and I am still enjoying figuring out the story knowing who did it. I’m picking up on more of Christie’s sneaky clues and seeing where all the strings of this plot are attached from the backside.

Last night, as I sat reading, I realized who I wanted today’s She Wrote to be about. A writer who can make me laugh, shake, and keep my eyes riveted to the book even though I already know who dunnit? Influential alert.

I think the first time I came into contact with Agatha Christie was at the public library when I was maybe in middle school, or even younger. I wanted to write, so I was reading about writers and the craft. I remember reading a quote about her that I think about all the time, in which she talked about how she wrote her mysteries backwards — knowing first who did it and why, and then throwing red herrings and clues and twists on top to make it mysterious. As a ten year old, I was blown away by the idea that writers didn’t write their stories in the same order I read them. While my understanding of how fiction writing works has improved exponentially, I still think about that a lot when I write and read.

I hadn’t read any of her books, but I had a PC game of her novels when I was probably ten or so, where you played the faithful Poirot sidekick or protagonist and talked to the characters and investigated the crime scenes and lived out the stories in really beautiful 1920s scenes. I loved Murder on the Orient Express version and was delighted with the finale, but had to stop playing And Then There Were None because I scared myself with it.

When I finally got to the books in late high school, I devoured And Then There Were None in one sitting. I read The Body in the Library on the porch one hot summer day, not even getting up when I was starting to get a sunburn. I read Murder on the Orient Express and Death on the Nile in rapid succession when the films were announced. I celebrated Christmas with Hercule Poirot’s Christmas.

When social distancing and stay at home orders started, I wanted something quick and fun to read while stuck at home. I raced through Murder in Mesopotamia (I figured out the killer quickly but she surprised me with the how), taking notes about motives and opportunities. The Murder at the Vicarage endeared me to a cast of characters that I was genuinely sorry to leave.

Christie is a master of the craft for several reasons. Obviously, she can craft a chilling and confusing crime. Her special characters, Hercule Poirot and Miss Marple are well developed and intriguing. She can manage to scare me and make me laugh. She understands the human mind and motives to an acute degree and fills her stories with believable and original motives. But I think Christie’s true power, for me at least, is in the way she sets up the perspective and voice of her narrators.

Despite Poirot and Marple being the most famous Christie characters, neither tells the detective story from their own perspective. Sometimes the story is told through third person, like Murder on the Orient Express, but my favorite Christie stories are told through the first person account of someone who is involved in the case. In each story, Christie manages to give us interesting, original, and engaging narrators that each have their own traits, habits, and quirks. I love reading the narrators’ takes on Poirot when they meet him for the first time, or the first time he surprises them with an astute deduction. I love seeing their own biases and suspicions as they navigate their local world or exotic ones and deal with quirky or endearing characters.

Christie knows people. She knows what makes them tick and what would drive them to kill. No two are ever the same. They have their own voices and personalities and indulgences. They are never paper thin, but as real as we are. Even against Poirot, a character with over 30 appearances, a character who appears for only one mystery is as fleshed out as the great detective himself. An acute observer of people, Christie can really make her characters come to life, even in death.

Despite being so well acquainted with human nature (or perhaps because of), Christie herself is one of the most enigmatic women in literature. At the height of her career, when she was the bestselling author in the Western world, Christie vanished. A nationwide manhunt was set up in England to find her when disturbing clues made her inner circle and the police suspicious. She was later found at a resort, and never spoke about what happened or why. Fitting for the Queen of Mystery to have lived one herself. 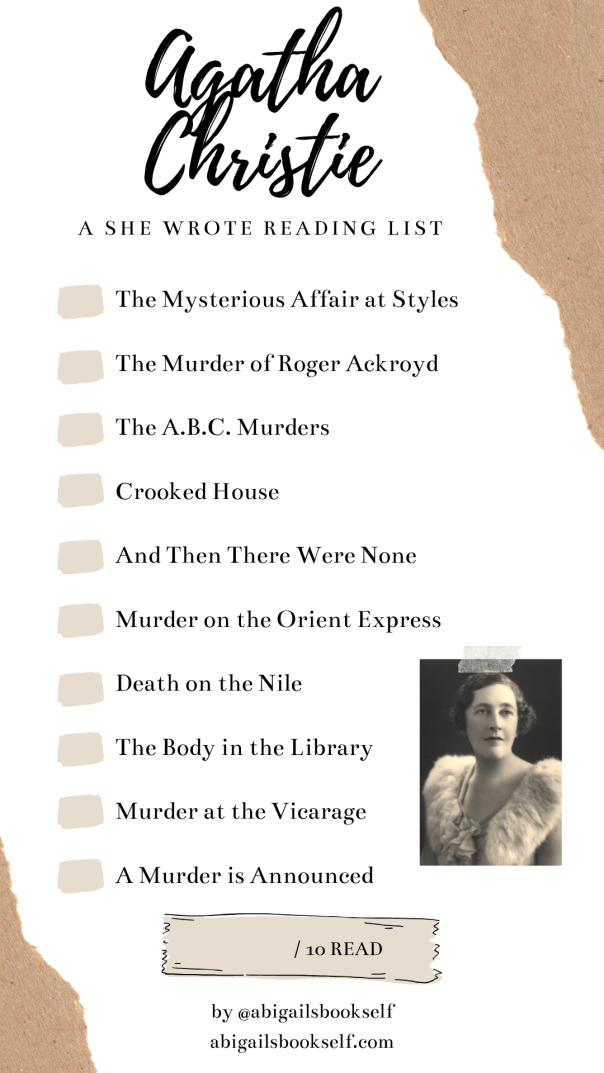 I would be remiss to praise Christie blindly when there are several issues that need to be brought up about her. I’m sure if you read Christie yourself, you’ll notice a lot of disparaging and downright racist comments made against Jews and other minority groups. The original title of And Then There Were None is enough controversy (click with care! This article uses the N word) to lock Christie away forever. We can say that this was a marker of her time, and yes, it very much was traditional for white people to hold and disperse negative ideas about other people in the 1920s and 30s. Still, this never excuses historical figures from being held accountable for prejudices and biases that were harmful to others.

I don’t believe in cancel culture. I grew up in the American South, so I know first hand how racism and sexism and prejudice are handed down to younger generations, how insular communities create an atmosphere of acceptance, if not plain celebration, of hateful beliefs, and how traditions of hate and discrimination can be branded in one’s view of the world. I also know how people can challenge and change these ideas and rise above their raising to not only reject prejudice but actively fight it. I believe in education, not abandonment.

Obviously, I can’t talk to Christie and tell her how her casually racist comments were hurtful to a lot of people, how her use of certain words is wrong, or how her stereotypical language and characterization is ignorant. But I can hold what I like about her and what was wrong about her in both hands. I can use what I know she did wrong to inform my readings and still enjoy her meddling old ladies and particular Belgian detectives. I can reject her prejudices. I don’t have to accept them or take them as my own. I can also do this — tell others about the things she did wrong and remind them that those things are, in fact, wrong. I can use my platform to educate about her, while also recognizing the place she holds in my heart.

A lot of this is my white privilege. I’m not forgiving her, but my ability to, in some ways, allow her language is a power of my privilege. I am not one of the minorities that she was hurtful against. Still, I want to use my voice and privilege to open dialogue and discussion about these things so that people of color, and those who are targeted by Christie’s language, don’t have to do that work.

The amazing thing about our little gray cells is that they have immense capacity for education. They were made for this work, to constantly learn and unlearn and challenge and adjust. In the same way that Poirot can use tiny clues to change his own ideas about who the killer is, we can use clues from the past and present, from our inner circles and strangers, from books and lived experience, to change how we, as a culture and community and nation, interact with our world. We can find problems in the narrative, account for them with clues, and make changes based on what we already know.

Here are some links for your further reading about Agatha Christie, which I hope you’ll consider if you move forward with her works:

She Wrote is not about idolizing women writers and ignoring what they’ve done wrong. It’s not a series to erase problematic information about them and their lives. It’s about recognizing the power of the female writer in my life (for better or worse), to talk about how I live with or live out what they’ve written, how they’ve made me realize things about myself and my world that I didn’t before. I will always do my best to recognize problematic behavior and read and interact with them critically, not blindly.

I hope you, dear reader, can do the same.