Welcome, dear reader, to my newest series! SHE WROTE is a series about women writers that have influenced me with their lives and works. Each week, I’ll profile a female author and share my personal experience with them, my favorite of their works, some links for further reading about them, and a checklist so you can join in the fun by reading their works too! I’m really excited about this series, so I hope you’ll enjoy!

I read Mary Shelley for the first time in my first year of college. I took a course called Global Awareness: Romantic Britain because it was a literature class with a travel component. After the course, in which we read and wrote about Romantic literature in Britain, we flew to the United Kingdom for two weeks to explore the sites of the authors and works. I had been dying to go to England my whole life, so signed up on that alone, having no clue about Romantic poetry. 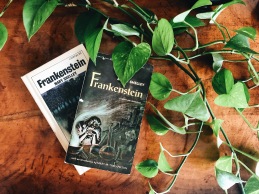 Little did I know how influential that class would be! It formed the basis of my entire literary study in college. I went on to take further courses in Romanticism, found Gothic literature, became vegetarian for six months, discovered my favorite poem of all time and wrote my senior thesis on it, and met Victor Frankenstein and the Creature for the first time.

In the first two weeks, before we’d barely gotten off the ground with the course itself, we all had to sign up to give a presentation and write a short paper on a writer from the period (the class was pass/fail so there was more reading than anything). I picked Mary Shelley because she was a woman and I’d grown up liking monster fiction (vampires, werewolves, witches, oh my!).

I ordered a battered old copy of Frankenstein from Thriftbooks, which serendipitously was engraved with “A.B.” on the top binding with highlighter and pen — I’m sure a very bored high schooler etched it on while their teacher droned on about man versus nature. I remember how surprised I was as I began reading, how completely different it was from anything I thought I knew about Frankenstein: no green monsters grunting in flaming windmills, no lightning struck towers, no eerie castles in the German countryside.

What I found was a moving story about the relationship between creation and creator, parent and child, humanity and nature, love and fear. I was so enthralled that I finished it in one night and went back within a week to read it again. I attacked it with a highlighter and pen and sticky notes, finding no end of magic and wonder and emotion that I wanted to carve into my brain to have forever. It remains to this day one of the most beautifully poetic novels I’ve ever read. You can flip to any random page and read any random sentence and I’ll get chills from the syntax alone! 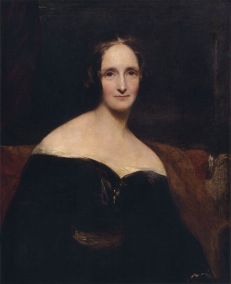 As I began to learn about the author’s life, I was even more entranced. I’m getting a little emotional even thinking about that discovery, learning about the woman behind, arguably, one of the most famous stories in the world. Her story helped me to process my own, and I wish I could thank her personally for helping that bitter and walled-up 19-year-old begin to explore the fathoms of her own heart.

I ended up making my presentation about the parallels between Mary’s life and the lives of her characters, how her own experience and emotions informed the story which I felt to be, while wildly imaginative, completely relatable. I was working through my own complex feelings about creation and family and independence and I found a lot of solace in that little book.

Here are some quick interesting tid-bits about her life to get you hooked:

The semester ended, the real fun began! While visiting the Lake District in England, we toured the archives at Dove Cottage, a famous William Wordsworth site. At the end of the presentation in which we got to see some really amazing stuff, the archivist surprised me by showing me a first edition of Frankenstein. He urged me to read the famous chapter about the Creature’s birth aloud, but I was so overcome with emotion that I couldn’t do much more than sit there and stare at this thing — this marvelous artifact that was in the world when she was, that she’d labored to bring into the universe and made her name legendary, that lasted the two hundred odd years between her life and mine. It remains one of the fondest memories of my life. 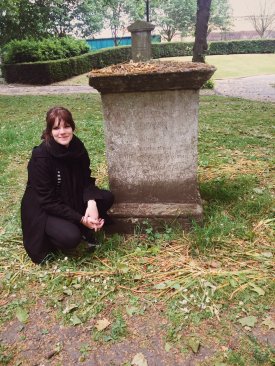 Baby me at Mary Wollstonecraft’s grave marker. She was actually moved down to Bournemouth when Mary S. died in 1850 to be buried with her (and rumor has it, an organ of Percy’s that Mary S. kept wrapped in a copy of a Keats’ poem after Percy’s death).

I was one of the last to give my presentation when we ventured abroad since I was presenting in London (we began in Edinburgh and bussed all the way down to London over two weeks). My small class of brilliant young women, most of us the same age as Mary herself when she wrote the novel, gathered around the headstone of Mary Wollstonecraft, Mary’s mother, in St. Pancreas graveyard and listened to me wax poetic about how brilliant Mary was, how troubled, how complex, and how Frankenstein was the best novel ever penned (Ah, the zeal of a first year college student).

(I became the Frankenstein girl after that, and really leaned into it during the Gothic course where I lectured a student for an unreasonable amount of time about how calling the Creature “the Monster” was completely stupid and out of touch. Listen, I care a lot, alright?)

I have a poster of Mary Shelley on my wall, with a matching decorative pillow. I have a collection of over 30 copies of Frankenstein. I have probably every biography written about her, along with several critical texts (dense and overwrought but cherished!). I even made a Mary Shelley poster to put in my Animal Crossing house (adding that in case you think I’m not very die hard from the above facts alone).

I want to visit her grave one day and tell her how she changed everything for me. I want to revisit St. Pancreas graveyard in London, where she, as a teen, read volumes of her mother’s poetry over the woman’s grave and rendezvoused with Percy Shelley.

There’s something to be said about the power that our first loves (of anything) have over the trajectory of our lives. I found Mary exactly when I needed her, and she’s not failed once to enchant me, inspire me, and excite me. 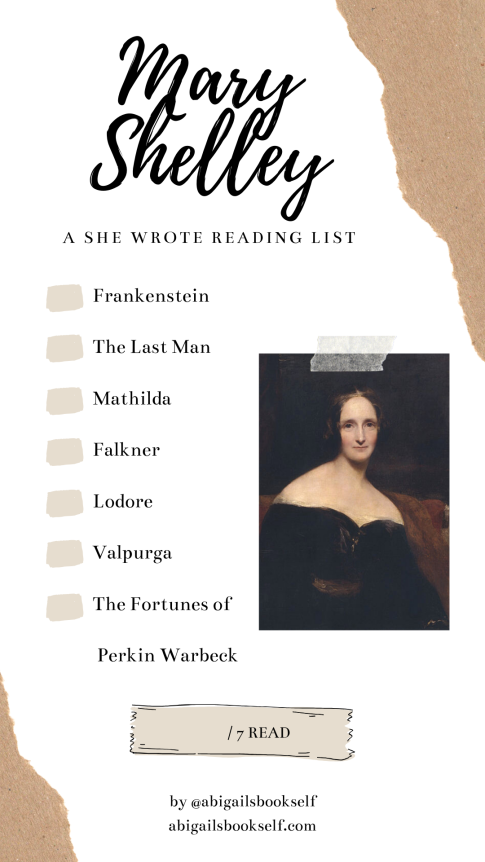 Check off the ones you’ve read and share them on your instagram story. Tag me so I can see them! @abigailsbookself

Maybe one day I’ll be able to write something coherent about her, but until then, here are a few links to some further reading if you’re interested:

I urge you to give her and Frankenstein a chance! Whether you know the novel story, or you’re only familiar with the Hollywood version, I think you’ll find yourself surprised and delighted by the novel itself. One day, we can talk about how Hollywood can’t ever get this adaptation right, but…. not today.

Let me know in the comments below if you’ve read Frankenstein! Until next time, my dear reader!

2 thoughts on “She Wrote: Mary Shelley”

Made a much anticipated B&N run today for two new releases I’ve been waiting on and a sequel that I absolutely must have right this minute and ended up picking up another TBR book on the register! I wish I had three sets of hands and three brains so I didn’t have to choose which to start next — Harrow, Babel, or Oleander Sword…. #babel #oleandersword #harrowtheninth #thelightfromuncommonstars
Uh, hi 🥰 Okay, maybe I haven’t posted in almost 2 years but I think these 1970s Anne McCaffery covers make up for that.
My wrap up for The Middle East is now live on my blog along with some thoughts about translations! Link in bio!
Here’s to the next 25 being filled with just as many books, just as many cats, and many more twinkle lights! #happybirthdaytome #bookstagram #bookish #books #reading
New blog posts coming soon! I’m talking about my favorite page-to-screen adaptations, my most anticipated new releases, and the adaptations that flopped for me... Stay tuned! Catch up on my posts at the link in my bio! 💕
Ah, September! We’re starting the best quarter of the year at last! I’m looking forward to cool weather and my birthday and Halloween and the holidays.... what are you looking forward to the rest of this year?