We read books for a variety of reasons: to escape, to have an adventure, to stretch our minds, to get away from the hum-drum of life for a while, to learn, to experience. It’s been a long time since I read a book to feel good.

Lately, in the YA universe at least, authors have been experimenting with their ability to make us feel for the characters, and mostly that involves no scant amount of hurting. From being ripped to shreds in Verity, to crying like a fool in Henrietta, to bleeding out in the Great Hall at Hogwarts, a lot of books test our emotional mettle by making us feel a plethora of powerful emotions, and usually that comes in the form of sadness or grief or suffering. Don’t get me wrong, I love a good cathartic cry when no actual lives are at risk and I savor that powerful emotional moment when I can fully realize myself in a character, which is usually no better achieved than with a good helping of Oh God, It Hurts So Good. I think it makes me a more compassionate and empathetic person at the end of the day. I can stretch and strengthen those muscles in the fantasy world of a book and then when the call comes, I can practice sympathy and empathy in the real world in a more mindful and aware way. Books are always proving themselves to be good practice for The Real World.

But when was the last time you got to stretch those happy muscles? When was the last time you got to practice smiling and laughing? When was the last time you felt that warm bloom in your chest completely scotch-free? Usually we get glimpses of this moment in books and they are as fleeting as they are in real life, more often set up to make the tumble into suffering much more ferocious. Like real life, we distrust moments of bliss and joy because we know the higher we soar, the longer our fall. I think there are a few books that give us unadulterated joy without the risk of danger, books that allow us our smiles without threatening to disembowel us if we enjoy it too much. Off the top of my head, I think of Jane Austen, who was joyous and witty and playful in a way that both enraptured and entertained. Imagine it — we don’t have to be threatened with death every chapter to remain hooked on a book. (Maybe I should search for books with less mortal danger…)

This week, after holding this book on my TBR for weeks and only splashing about in the first couple of pages in a non-committal way, I decided to pick myself up out of my book slump with The Guernsey Literary and Potato Peel Pie Society by Mary Ann Shaffer and Annie Barrows. I was running out of renewals at the library, and I was desperate to finish a book this week so I would feel like I had accomplished something after all.

I had read a little of the novel already, and I delighted in the utter charm of it. It’s been a long time since I had read anything as effortless and intimate as this novel was.  Juliet Ashton is so easy to love and to root for, with her wit and humor and “sunny nature and light heart.” She was charming and easy-going, and I felt very soon that we were as close to one another as she was to Sidney and Sophie. The epistolary format of the novel lends a lot to the intimacy of it, because we are introduced to people as if we already know them at first, and by the time we begin to be introduced to the Society, it feels like we’re receiving the letters the same as Juliet. I am so charmed by the novel and its style. Writers — read this for the craft of it! The character building and development is fantastic. Revealing the characters a letter at a time is brilliant.

It’s hard to decide who I loved more. At the start, I was head over heels for Juliet, and then before long I felt dear to Sidney, and then, before you know it, you are just as much a part of the Society as Juliet is, and it feels quite akin to choosing between your own dear friends to chose a favorite character. I will admit to being especially fond of the quirky Kit, whose tenacity and resolve I quite admire, and to Isola, who grew on me more and more during the last part of the novel that I was dreadfully sad to part with her — god, how she made me laugh in her letters to Sidney. And Elizabeth. Who dares to not be enraptured and entranced by that legendary lady? The characters were charming, interesting, and unexpected. They made me laugh and smile and cry. It was a perfect portrait of the human spirit and it warmed me from top to toes. Of course, I am a huge sucker for family-you-choose style novels where characters build their own family unit from seemingly disparate parts, so this one was destined for greatness from the start!

This book lends itself so easily and effortlessly to be a feel-good novel, as my heart was warm and full the entire time I spent with it (and now still reflecting upon it!). Still, the novel isn’t just fluff. In fact, it deals with very grave and very serious topics surrounding the occupation of the island during the Second World War, and generally the havoc that war wreaks upon the human spirit. Nothing is left hidden to us, as the characters divulge their memories about the German occupation and all the horrors they had seen. Each real and gritty moment is turned out by a different character, so we see how various aspects of the war affected certain people and nothing is left to the dark of history. From the concentration and death camps, to starvation and hunger on the island, to the environmental impacts of island occupation, to the individual family turmoils and suffering, to blurred lines between enemy and friend, to small mercies and great betrayals — we see the full span of human suffering and perseverance in this novel through the eyes of the Society. It’s an entirely new take on war novels, and I leave it feeling more hopeful than hopeless.

This is the kind of book that I want to buy a hundred copies of and hand it out to people in the streets. That’s how much it moved me and how much I needed it at the moment. With depression, any fine week can turn sour for seemingly no reason at all, and after a couple of wonderful weeks I found myself at the bottom of a dark pit. Juliet Ashton appeared at the top. Isola lent me a hand. Elizabeth gave me a nudge. We stood at the top of that hole together. This book has won its way to the top of my list. It is definitely a top five. 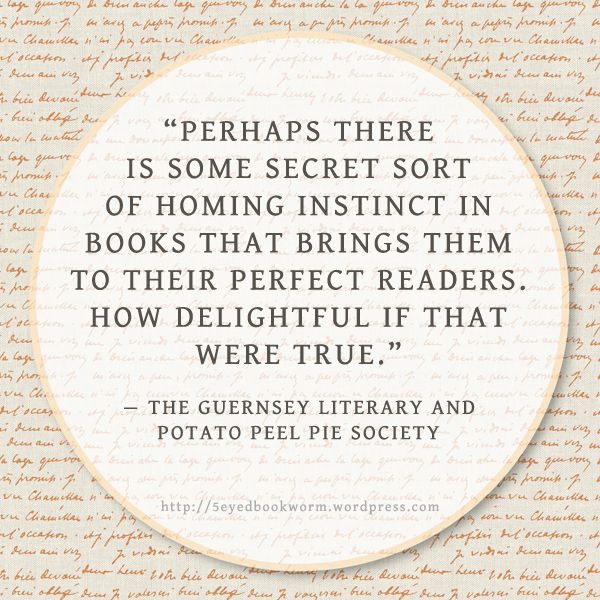 The film adaptation of this novel is released this spring, so I’m terrifically excited for it, especially since it has so many wonderful Downton Abbey alumni. I think Lily James was the perfect choice for Juliet, and I’m especially thrilled about Matthew Goode as Sidney Stark. We also have Jessica Brown Findlay as Elizabeth McKenna, Michiel Huisman as Dawsey Adams, and Penelope Wilton as Amelia Maugery. A truly magnificent cast! Just skimming the cast list, I can tell which plot lines have been cut out for the film, but I think it will be okay. Movies and books are different, after all, and have different aims. As long as it keeps the warmth and the humor, I think it will be a huge success.

What books make you feel good when you read them? What you read TGLPPS yet? What did you think? Are you excited about the film?

My wrap up for The Middle East is now live on my blog along with some thoughts about translations! Link in bio!
Here’s to the next 25 being filled with just as many books, just as many cats, and many more twinkle lights! #happybirthdaytome #bookstagram #bookish #books #reading
New blog posts coming soon! I’m talking about my favorite page-to-screen adaptations, my most anticipated new releases, and the adaptations that flopped for me... Stay tuned! Catch up on my posts at the link in my bio! 💕
Ah, September! We’re starting the best quarter of the year at last! I’m looking forward to cool weather and my birthday and Halloween and the holidays.... what are you looking forward to the rest of this year?
Read anything really good lately? I enjoyed this cute novel from Nadiya Hussain last weekend!
NEW POST: I’ve just shared my wrap-up for August where I read European authors for my Own Voices Global Reading Challenge. Check abigailsbookself.com to see what I read and loved! #bookstagram #bookblog #reading #ownglobalreads #lgbtfiction #muslimfiction #books #bookish