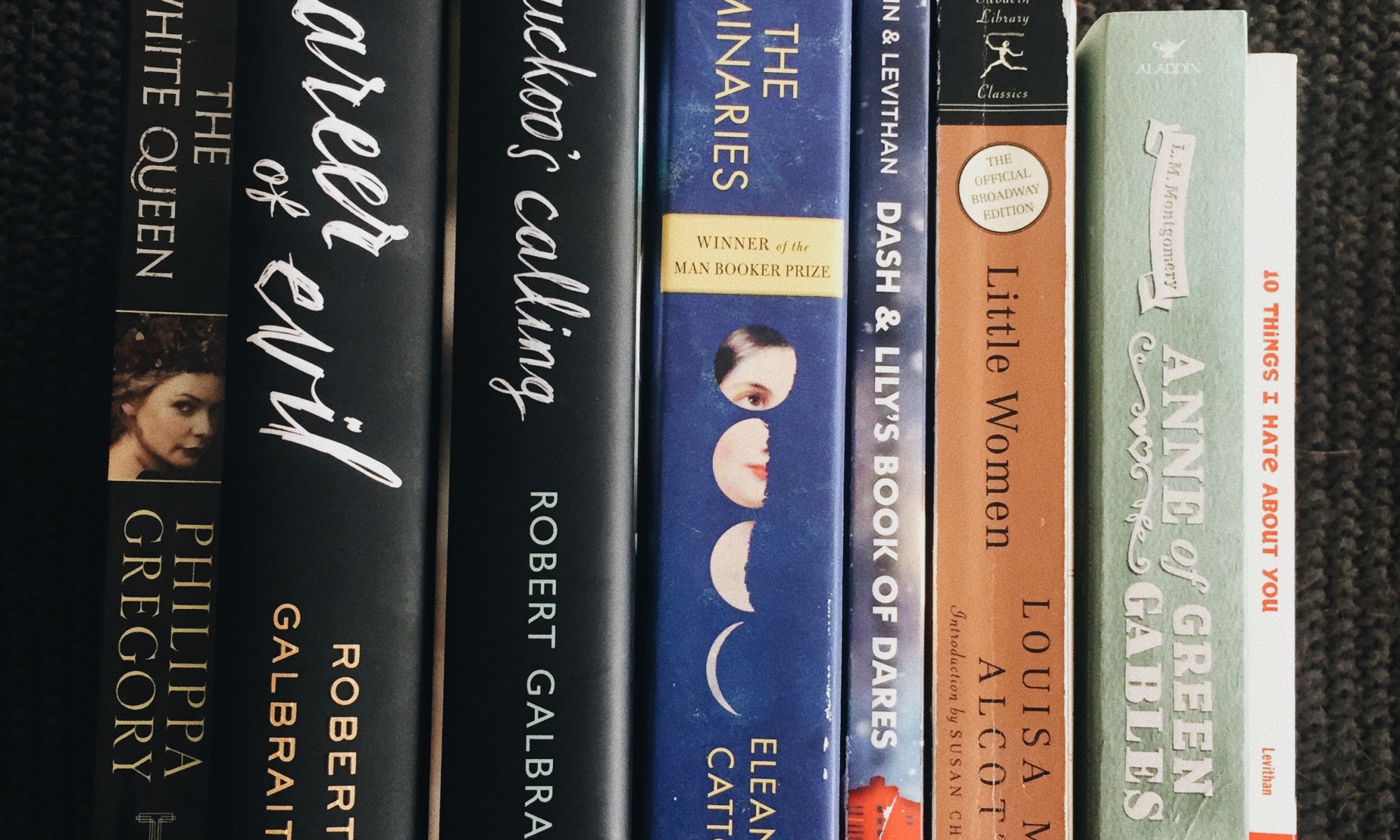 WOW I have been MIA for TEN days! Were you about to send around a search party? Put up MISSING signs? Assume I cut off my hair and began a second life as a shepherd in rural Scotland? Well, I didn’t shear my lock or any sheep, I was just bundled down with work and holidays and one day of missing turned into two, into five, into ten.

I’m not proud of it, but life happens. My sister came home from school, there were family get togethers and birthdays, there was shopping and decorating and cleaning, and certainly there was no shortage of work and evenings where I was so tired I just wanted to fall into bed. This time of year especially things are getting busy and there seems to never be moment to sit and focus on something for longer than a few minutes. I also start my new job at the library tomorrow (!!) so I do not doubt that this month’s posts will be a little farther between. I hope to get some bulk posts written so I can schedule them and you won’t miss me too much. I appreciate you sticking around regardless.

So, since I missed a few days, I managed to stack up a couple of book hauls so today I give you a bargain book haul. All of these were thrifted or purchased for a stupidly low price. It’s about to be Christmas, and my TBR stack is only getting larger at this point, but I can’t help myself when I see a good deal on a book. I’m so impulsive when it comes to books. 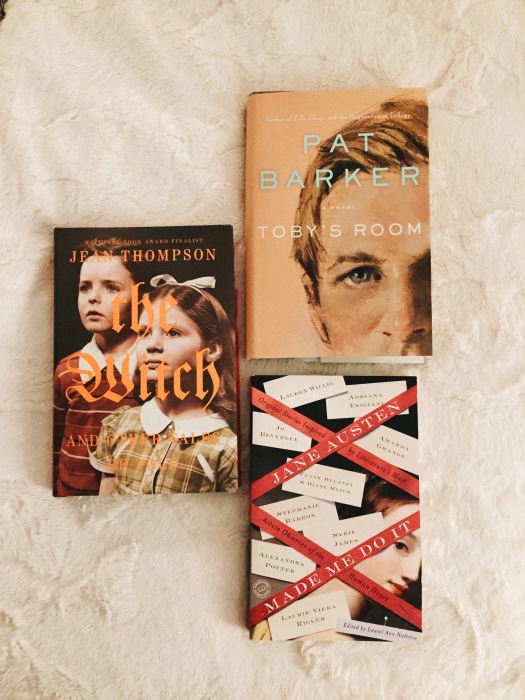 On two separate trips I picked up these three novels. I have The Witch and Other Tales Re-Told by Jean Thompson, which promises to be adult retellings of classic fairy tales. After reading Leigh Bardugo’s take on fairy tales in The Language of Thorns, I’m excited to slip into this anthology and hopefully be disturbed. I also snapped up Toby’s Room by Pat Baker which is a First World War era drama about siblings on opposite sides of the sea during the war. It promises intrigue and danger, so I’m game. Finally, I snagged up Jane Austen Made Me Do It, edited by Laurel Ann Nattress. It’s a collection of Austen-inspired short stories, so yes, please. It’s Jane Austen’s birthday this week, so stay tuned for a special post about that, and also a review of Jane Austen and the Twelve Days of Christmas, which is on my December TBR. Each of these cost me a mere one dollar, so if they don’t turn out to be all that wonderful, it’s really no skin off my back (sorry, I hate that idiom, but there it is). 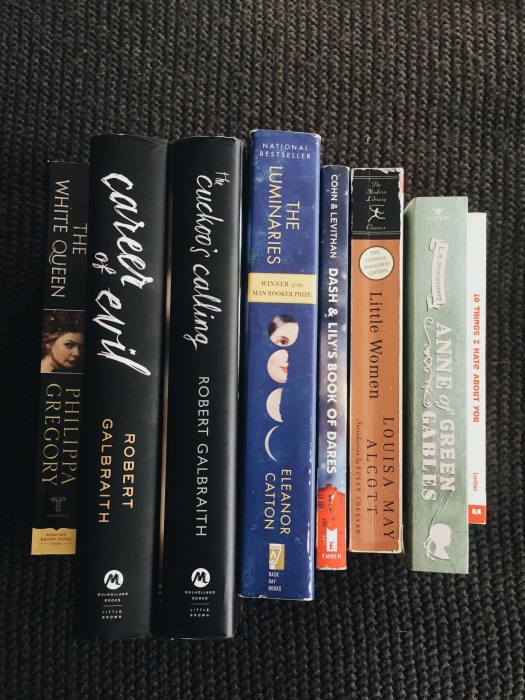 These are only headed together because I took the photo of all of them together.

Thriftbooks had a Cyber Monday sale, buy four get one free, so these purchases are from that deal. I snagged up The Luminaries by Eleanor Cotton, which I have been eyeing for at least a year. The cover is so beautiful, and it seems to be so dreamy and elegant, so hopefully the insides match the outsides. I also grabbed Dash and Lily’s Book of Dares by David Levithan and Rachel Cohn, since I was looking for a few holiday reads. I saw Levithan and Cohn speak on a panel about a year ago at an event I attended to see Maggie Stiefvater, and I’d heard good things about Levithan. Review up soon since I managed to read it earlier this week. I also bought a paperback copy of Little Women by Louisa May Alcott, which I had never read. I wanted a book I could mark up a little, and wasn’t willing to deface my old hardback since it’s so pretty and vintage. The cover of this book is absolutely horrendous, think Chicken Noodle Soup for the Soul on crack, so it will be a spine only shot for all time. I also picked up Anne of Green Gables, partly because Hopper reads it to Eleven in Stranger Things 2 and partly because I’ve seen so many lyrical quotes from this book. Finally, I picked up another David Levithan novel which inspired one of my very favorite movies, Ten Things I Hate About You. This movie is gold, so I’m excited to read the novel. It’s pretty short so hopefully I can finish it up in a sitting and give you a review soon!

From Ollie’s, I managed to begin a Robert Galbraith (J.K. Rowling) collection! I bought A Casual Vacancy earlier this fall, but I found two of the Cormoran Strike novels, The Cuckoo’s Calling and Career of Evil. I became interested in mystery when I read some Agatha Christie back in October, so I’m eager to check these out. I love Galbraith/Rowling’s writing style more and more as I finish up my Harry Potter readathon — the simplicity and cunning of her language use is spectacular. She’s an amazing storyteller. I also picked up my first Phillipa Gregory novel, The White Queen. I watched a bit of the series on Amazon, and really liked it, so I hope I’ll like the novel just as well! 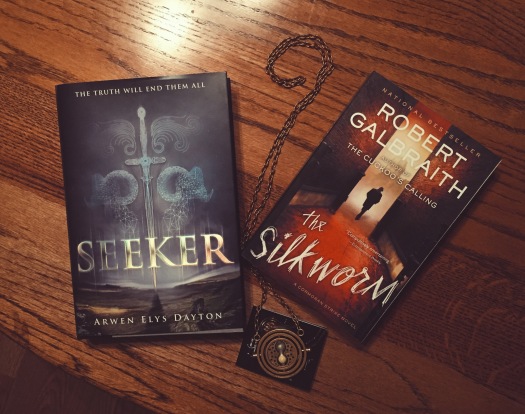 As reward for suffering through a family reunion, my mom took me to Barnes and Nobel today. I limited myself to two bargain buys and one fun item. I picked up Seeker by Arwen Elys Dayton quite randomly, because the cover was nice. It appears to be a fantasy adventure in alt-Scotland with a strong female lead, so that should be fun. I also completed my Galbraith collection with the middle book, The Silkworm. Finally, I purchased a little time turner from Harry Potter because — obviously.

So that’s where I’ve been haul-wise the past few days. I’m going to try to stop buying books until the New Year, so I can focus on reading and finishing up my yearly challenge. Stay tuned for reviews!

Have you been doing any book hauling this holiday season? Have you read any of the books I got? Did you like them?