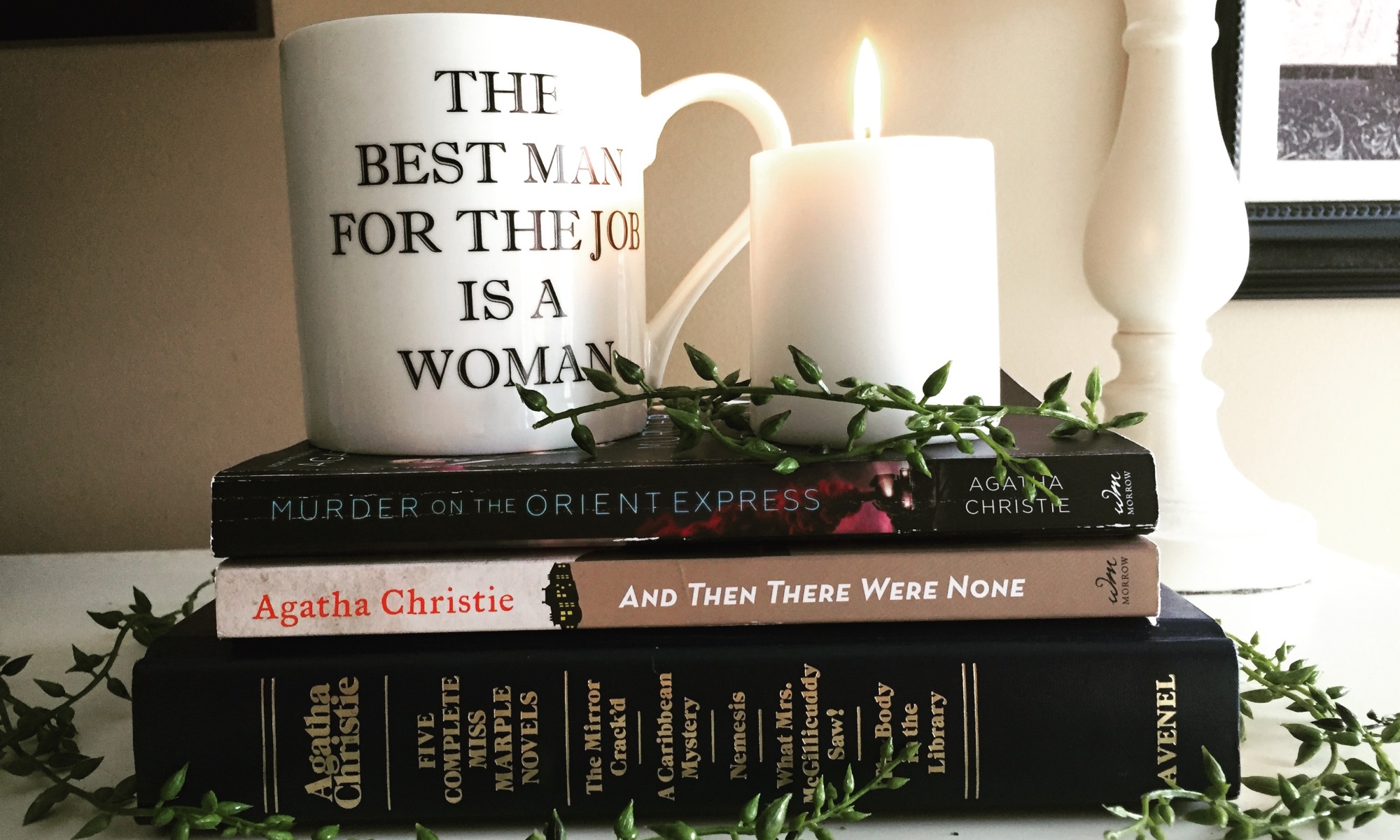 To celebrate the release of Kenneth Branagh’s Murder on the Orient Express, and to kick off my Author Tuesdays, let’s talk about Agatha Christie!

Whether or not you’ve ever read a Christie novel, I’m sure you’ve at least heard of her. She’s the undeniable Queen of Mystery and is one of the best selling authors of all time. Her most infamous creation is Hercule Poirot, the quirky genius detective, but she’s also well known for her independent novels and the Miss Marple collection, about an elderly woman who solves crimes in her small town. Before we break into my reviews, let’s take a minute to get to know Christie.

I won’t bore you to death with biographical details, so here are five fast facts about Christie, all taken from her website, which has more information if you’d like to read on.

Front page regarding her disappearance.

Christie and Mallowan on a dig site.

Christie as a young girl.

I’ve read three of Christie’s novels this fall, and I chose them in an attempt to get a wide view of the kind of story that Christie was capable of. All of them deal in careful clues, twisting narratives, and untrustworthy characters, and all of them were a joy to read!

This is the novel that got me interested in Christie. I never framed myself as a mystery-lover, but I do love crime shows like 20/20, Dateline, and anything on the Investigation Discovery Channel, so I guess I should have given crime novels a go earlier! I picked up this novel because the film was about to be released, and because I had a computer game as a child that was based off this story that I loved dearly. So, I knew how this story was going to end, but that didn’t make the process any less enjoyable.

The premise of the novel is ambitious: a vaguely unlikable man is murdered on the cross-continent voyage of the Orient Express. The train is delayed by heavy snowfall, and the famous detective Hercule Poirot, who was planning to enjoy a peaceful journey, is recruited to investigate the 12 passengers and figure out who killed the man. Twelve suspects is a lot to keep track of, and there is a lot of evidence and motive to investigate, but Christie keeps the information manageable and, though some of the lesser characters can blend together or fade out, the cast as a whole provides plenty of entertainment and intrigue. I won’t spoil, in case you haven’t heard how it ends, but I will say that it is so clever that you’ll never see it coming.

I really enjoyed Poirot. He’s charming, quirky, and so damn smart that half the novel is keeping up with him. Christie has a tendency to be very cut and dry, meaning she doesn’t infuse a lot of emotion into her texts. She deals in the black and white of things, in cold logic and provable fact. While this novel sets up a lot of emotional turbulence with its conclusion, Christie keeps her feet dry by ending the novel right when the emotional could have run in and stolen the genius of the crime. I personally prefer a little more feeling and emotion in my stories. I like to feel with characters and experience their emotional conflicts, but Christie left me hanging with this one. As I read more of her work, I found the same issue, but it’s probably my only complaint with Christie’s work.

I’ll take a quick moment to talk about the film, since I felt the film not only was a roaring success in cinematography, acting, and directing, but it also filled in those pitfalls that I found in Christie’s writing. The film was chock full of emotion, but still kept all those subtle clues and careful stages that comprised Christie’s novel, and even added a few more with mirror doubling, claustrophobic and vertigo-inducing shots, and one lovely Last Supper reference. It diverted from Christie’s novel only to fill the characters with a little more heart and feeling, which I felt was done tastefully and neatly. I got choked up a few times in that film, which I love! It was cathartic and moving and I think Branagh did a wonderful job with it. It seems we’re in for a few more Branagh/Poirot collaborations so buckle up!

This novel was my least favorite of the three Christie stories I read. I can’t quite put my finger on why I didn’t like it as well, but I think some small part of it might have been Miss Marple herself — she didn’t add much and she was mega-judgmental. Maybe I’ll read a few more, since I have a collection, to test my theory but something here fell flat, and it wasn’t just the lack of human sympathy and emotion, which seems to be token in Christie’s novels.

When the body of a missing hotel dancer turns up in the library of a well-to-do family man, his wife calls in Miss Marple to offer her advice on the case. Between the skills of the detective and the nosy old woman, the murder is brought to light after some seriously twisty turns and inference. This ending I felt to be a little too absurd to be realistic or plausible, and while Christie likes those WTF moments, this one just didn’t seem to have even the smallest element of believability in it. With the other Christie novels I read, I felt at the end that though it was entirely wild, it was explained in a way to make it entirely possible, given the facts. I think another thing that I didn’t care for was the overly traditional motive. After Orient Express and And Then There Were None, I wanted something a little more eccentric. Seems I can’t be pleased! The events were too unbelievable, and the motive wasn’t unbelievable enough!

Again, I’m going to complain about the lack of compassion and feeling in this one. I felt the victim was treated quite unfairly by others, especially with a surplus of unkind comments. Additionally, there was a lot of glee, and not just from the weird and excitable child, about the fate of the murder. These folks love death — even when its in their own houses. When you look at the gender politics at play here, there are a lot of cringe-y moments, and oftentimes I wondered if I was reading too far into things or if Christie was trying to subtly suggest some underhanded behavior by various male characters. Overall, I think the context of gender was nearly as huge of a character as any of them, but was completely treated as the elephant in the room. I can’t hold it too strongly since I’m reading with a modern mind, and concepts about rape-culture and sexism and shaming weren’t so easily verbalized or examined when the novel was written in 1942. Still, this novel just didn’t do enough for me. It felt half-assed, honestly.

This was the first Christie novel I read, and it is undeniably my favorite. ATTWN is not a Poirot or Marple detective novel, so it stands in a category of its own. This story was also included with the Murder Mystery computer game pack that I had when I was a kid, so I again knew the outcome of the story, but it had been ages since I’d played the game. While I knew who the murder was, I couldn’t remember the hows and whys that make this novel so great and complex, so it was almost as good as reading it completely new.

This novel, like Orient Express, is made of a cast of seemingly unrelated characters. Ten people arrive to a remote island residence all under different pretenses, but all on the invitation of the mysterious U. N. Owen. Strangely, and horrifyingly, the guests suddenly start dying in the order and method described by a children’s nursery rhyme as soon as they arrive, and soon realize they have been stranded on the island with a pyscho-killer. It’s utterly insane and terrifying. The remaining guests must work agains the clock (and each other) to figure out who the murderer is before it’s too late.

Where the other Christie novels failed to thrill me or strike at my emotions, this novel went above and beyond. I was scared, I was anxious, I was sympathetic, I was horrified. The whole thing was a rollercoaster ride from start to finish, and I really could not put it down. Like the other novels, the ending was completely surprising, but this one finishes up with a confession which is even more spine chilling than the action of the novel. This murderer is the most psychotic that I’ve read, and foreshadows the kind of killers that we obsess over today from the likes of Stephen King.

I can’t write a review about this novel, no matter how well I like it, without addressing it’s very sketchy and messy past. The novel was originally published under another name, which I will not write here, but will link to. Clearly, the name is racist and meant to inspire thoughts of darkness, violence, otherness, and evil via the racism of the day in the reading audience of the 1940s. To add onto this racism cake that Christie was building, the novel was renamed for the American readership, to Ten Little Indians, which is still meant to signal all of those wicked stereotypes about a certain race, but in a distinctly American context (not to say that white Americans were worse on the Native populations than the Black ones, or that Black populations had it any easier because that word was removed from the American title). Eventually, publishers decided that racism, no matter who you were being racist to, was not cool or remotely acceptable, and they changed the title to it’s current iteration, with the children’s poem being Ten Little Soldiers instead. I had no idea about this history when I read the novel, though I was vaguely familiar with the rhyme from a similar, though less gruesome and equally racist rhyme about little Indians.

Christie’s racism doesn’t come as a terrible surprise to me, since in Orient Express there was a lot of slurring and stereotyping being thrown around by the passengers and suspects. In Branagh’s film, the racism is adjusted, I think, to help modern audiences (especially American) understand the racism in Christie’s novel, since the modern viewer may not think the casual intra-European racism is as harmful as it is. Branagh included a black character and some not-so-covert racism by another character so the modern reader could understand the subtle damage Christie was doing in her own work. Christie has been accused of racism before, (see her top ten moments here) and some reviewers had some comments about how the film dealt with it. In an age where we out predators, racists, misogynists, and various other aggressors in our society, lets not forget to be critical of even those who write damn good books.

Murder on the Orient Express Is Agatha Christie Minus the Racism

Yes, It Still Hurts to Read Racist Depictions in an Otherwise Good Book

The Queen of Crime

What’s your favorite Agatha Christie novel? What do you love about her? How do we deal with problematic authors in this modern age?